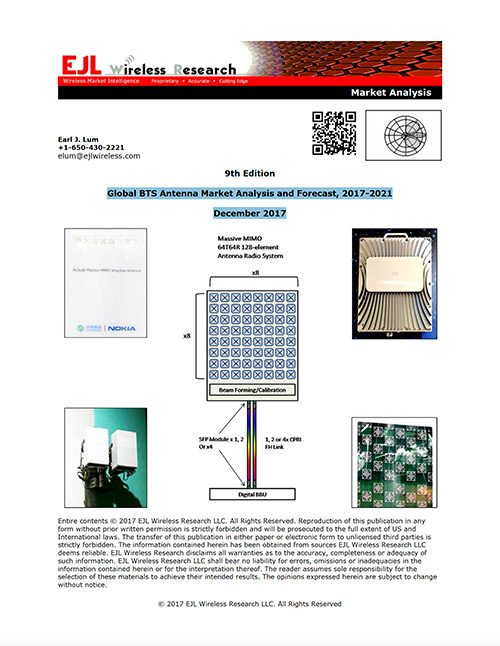 Salem, NH, December 19th, 2017:  Global macrocell BTS antenna shipments dropped by 15% in 2016 as the slowdown in China and slower CAPEX spending impacted investments in coverage and capacity mobile network upgrades, according to the latest report from EJL Wireless Research titled “Global Macrocell BTS Antenna Market Analysis and Forecast, 2017-2021 9th Edition.” “The continued decline of shipments in the TDD market, coupled with softness in FDD products that was impacted by demand weakness and the shift to higher port count products, resulted in the overall market decline. Revenues were down 5% due to the mix shift towards higher port count products, offsetting the drop in shipments of legacy lower priced 2-port and 4-port antennas,” says founder and President, Earl Lum. EJL Wireless Research is forecasting that the macrocell BTS antenna market will see a recovery with 11% growth in shipments during 2017 due to a temporary demand increase in China for NB-IoT networks and sight growth in India, offsetting weakness in North America and Europe.

“LTE-Advanced Pro services are driving mobile network upgrades to 4T4R remote radio unit (RRU) architectures, which in turn are requiring mobile operators to add more antenna ports and upgrade antenna systems in their networks. Additionally, the convergence of TDD and FDD services onto the same antenna system has resulted in the introduction of 30-port antenna products within the industry,” says Lum.

Total revenues including passive, semi-active, and massive MIMO antennas were USD $3.7 billion in 2016, down 5% from 2015 levels. EJL Wireless Research forecasts global antenna revenues to reach a record USD $45 billion by 2021 as massive MIMO antenna radio systems (MM-ARS) for LTE-Advanced Pro and 5G services contribute to the majority of revenues.

“We remain skeptical about the return on investment and capacity gains of current 32T32R FDD and 64T64R TDD MM-ARS solutions compared with current 4×4 MIMO technology for LTE-Advanced Pro services. We also believe that the use of sector splitting to add capacity may be the most economical option for addressing overloaded macro sites. The mobile industry may wait for 16T16R MM-ARS solutions before they deploy these types of products. We do however expect initial commercial deployments in the United States with 28GHz microwave MM-ARS products during the second half of 2018,” says Lum. ■