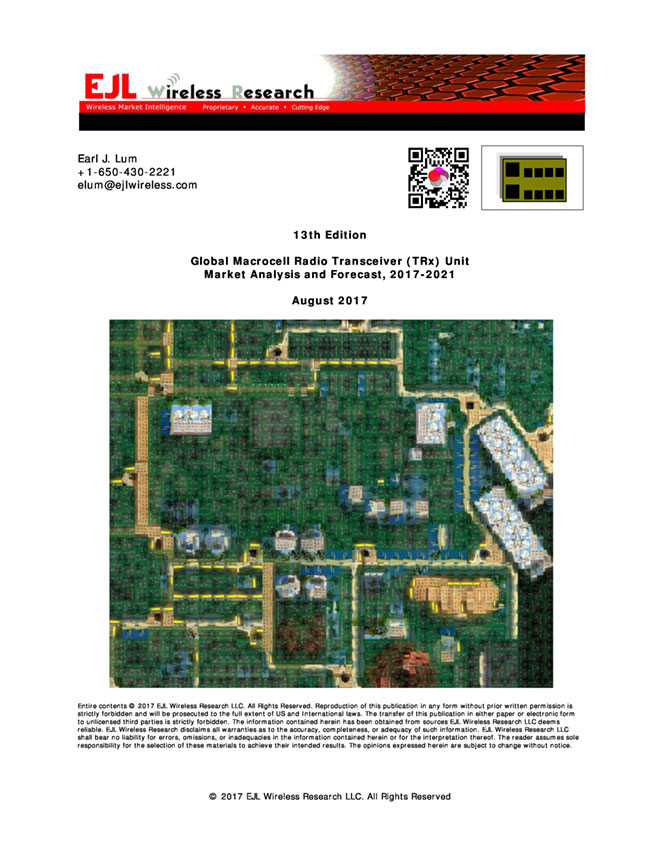 Salem, NH, August 30, 2017:  Shipments of macrocell radio transceivers (TRx) increased by 41% in 2016 to another year of record shipments, according to the latest report from EJL Wireless Research titled “Global Macrocell Radio Transceiver (TRx) Market Analysis and Forecast, 2017-2021 13th Edition.” “We expect that 5G new radio (NR) transceiver shipments will capture 80% of overall shipments by 2021,” says founder and President, Earl Lum. EJL Wireless Research is forecasting that the macrocell radio TRx market will see a 4% decline in shipments in 2017 due to lower CAPEX spending in China and Asia Pacific as well as softness in other regions before rebounding to growth in 2018.

EJL Wireless Research estimates that Chinese equipment vendors accounted for 66% of total radio TRx shipments in 2016 and have broken a deadlock at the 50% market share level they have shared with the European vendors over the past few years. Coupled with the expectations that China will be one of the first countries to commercially launch 5G services by 2020, the Chinese equipment vendors are again expected to dominate their home market.