4T4R RRUs up 100% as Massive MIMO continues to accelerate; Huawei #1 overall and in all categories of LTE

Despite NB-IoT upgrades in China, outlook negative for 2018 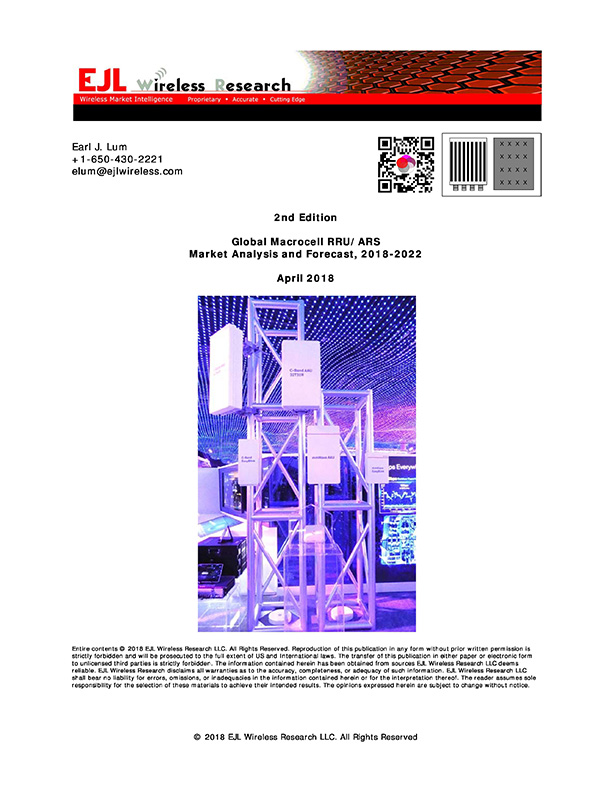 Salem, NH April 9, 2018:  Shipments of remote radio units (RRU) and antenna radio systems (ARS) were up 19% in 2017, according to the latest report from EJL Wireless Research titled “Global Macrocell RRU/ARS Market Analysis and Forecast, 2018-2022 2nd Edition.” “China’s 800/900MHz NB-IoT upgrades, coupled with growth in India and Europe offset weakness in North America and Asia in 2017,” says founder and President, Earl Lum. EJL Wireless Research is forecasting that the macrocell RRU/ARS market will see an 18% decline in shipments in 2018 due to continued lower CAPEX spending in China, operator consolidation in India, as well as softness in Asia Pacific.

“CAPEX guidance for China continues to drop but NB-IoT upgrades are expected to continue in 2018. Our thesis for 4T4R RRU upgrades remains intact given the doubling of shipments in 2017. LTE massive MIMO demand continues to grow, driven by deployments in China and India. We expect initial 5G NR mmwave networks to be deployed in the United States in the second half of 2018 while larger scale field trials are initiated in China,” says Lum.

“Specifically within the United States for <6GHz 5G NR ARSs, Sprint will be a major driver for n41 2500MHz Massive MIMO ARS (MM-ARS) over the next several years while AT&T, T-Mobile, and Verizon Wireless focus on microwave 5G NR ARS deployments in the n257 28GHz and n260 39GHz spectrum,” says Lum.